This month's meeting was an opportunity to see the physical progress of the layout that Alan and Keith have talked about and is now beginning to materialise. Our meeting venue was a chance to set out the baseboards on the flat surface of the church hall, and to finalise accurate measurements for the completion of the non scenic baseboards.

Alan Smith takes up the story.

The layout Keith and I are working on is Evercreech Junction. This was the hub of the Somerset and Dorset line and the subject of many books and films. The period modelled is the popular mid fifties to early sixties the line closed in March 1966. Nearly all trains stopped at Evercreech even though is was in the middle of nowhere! Freight trains were shunted in the two largish goods yards and this practice was carried on around the clock employing a number of staff. Nearly all passenger trains stopped either to take on water or add/remove pilot locos as the ruling gradients of 1 in 50 made double heading over the line a necessity.
The layout will be approximately 24 x 12 feet. and will incorporate two eight road storage yards. These will allow trains of up to twelve coaches and two locos long. 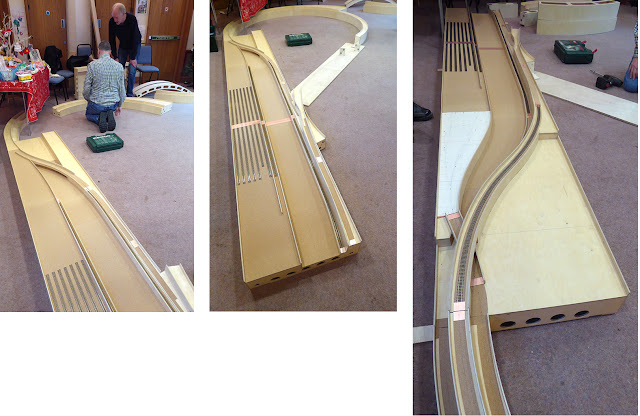 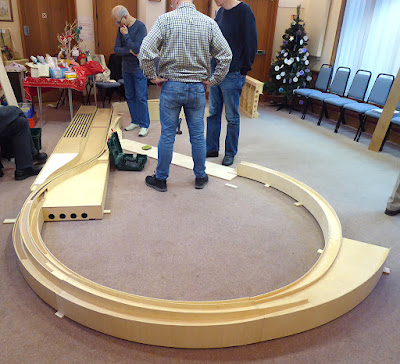 The base boards are constructed from birch plywood throughout and will be transported in ply transit cases, these in turn form the main part of the baseboard sub structure onto which the baseboards are mounted.

The scenic section is to scale with no compression of the prototype. It is only at the extreme scene ends that any compromises are taken. The main scenic boards of which there are seven in total form the main station and yard, the up main goods yard, the loco facilities and turntable, and the junction itself and the start of the branch line to Burnham-on- sea. The layout will be controlled by DCC and will incorporate some working features.
The layout has been a while in the planning with a start being made on baseboards about a year ago. We would expect the remainder of the boards to be completed by spring of next year. Some track is being laid in the fiddle yards and work has commenced on the fiddle yard throat point work.


We also discussed arrangements for our next exhibition appearance - 26 - 27 January 2019 - Erith MRS - and an additional appearance at The London Festival of Railway Modeling at Alexandra Palace on 23-24 March 2019.

The intention is to continue the Dapol Terrier conversion at the January meeting.

The loco of the month is Keith's almost complete 7f for the S&D layout above.

...and lastly - a very Merry Christmas and great New Year
Posted by Lightermans Yard at 01:50