A four man crew set off for the Tutbury supermeet on a very wet Friday morning with Alan, Keith and Pete K in a hire van and David in his car. Despite the miserably wet journey, upon arrival it was possible to reverse the van under a canopy so that unloading was relatively dry.

David brought along his finished South Eastern R1 although, because he was not happy with its running, it sat in the naughty corner for most of the day. Alan’s Jinties and pannier tank are now all fitted with stay alive units as were Keith’s trip locos and the difference in running reliability is remarkable. Pete did not have the G6 stay alive fitted in time so it sulked in the corner with the R1!

Lightermans Yard was packed away at a more leisurely pace than usual so no records were broken this time. By the time the crew hit the road the sun was making an appearance which made for a far more pleasant and stress free trip home.

Sunday 9th June was back to base for a break before the next show in October (see Association website calendar for details). Keith brought along his, now working, S&D 7F for us to wonder at. Running in DC mode it still performed beautifully. Keith is working on four of these locos and Alan is working on two. They will eventually be part of the loco stud on Evercreech Junction.

Pete K told Keith of the recent exchange on the VAG about pony truck control and pickup. Keith obliged by turning the 7F over in his work cradle and then removing the pony truck to reveal a grownup version of Simpson springing. The spring legs were set out sideways and up away from the chassis to provide downward pressure and also control the centralising of the pony truck. 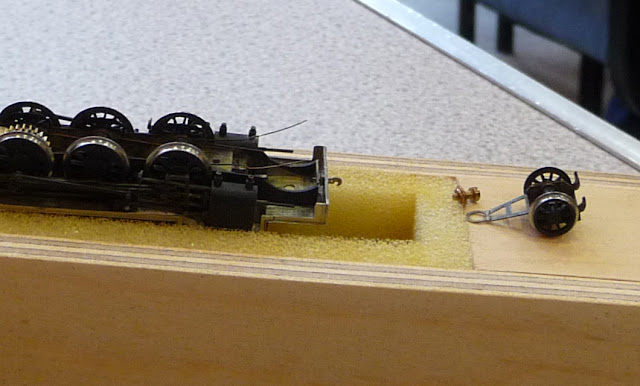 The day finished with a discussion on logistics for show invitations for 2020 and 2021.

Many thanks again to Pete King for being long suffering blog editor. Meanwhile Richard was feeling guilty again but managed to capture Tornado steaming through Wensleydale. 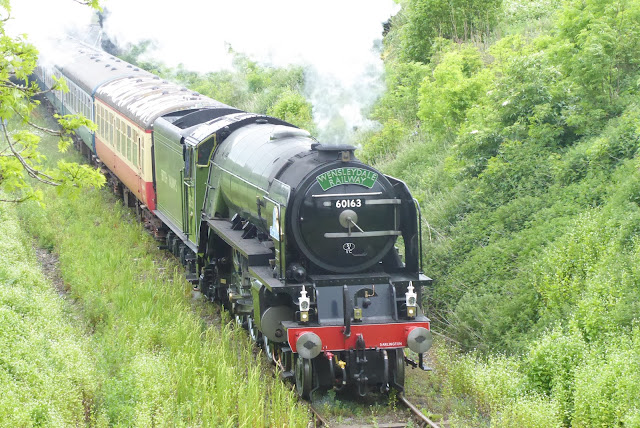 Posted by Lightermans Yard at 12:47 No comments: