The Group meets, generally on the second Sunday of each month, to work on the layout Lighterman's Yard. 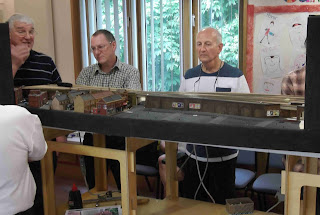 This is a slow process - as the layout needs to be extracted from storage and assembled at the beginning of each session, then disassembled and put back at the end. It started about twenty years ago, under the guidance of Andrew Cox. Recent progress has been good, and the layout made a semi-public appearance at last year's Kidderminster 2mm Meeting.

There's an invitation to appear in the 2015 Wilmington Charity Railway Exhibition - which would be rather convenient, as it's held virtually next door in the Church Hall, and Lighterman's Yard could be set up in its usual location (the Church Meeting Room) as a separate annex to the main show.

A little more progress was made during the latest meeting (June 14): 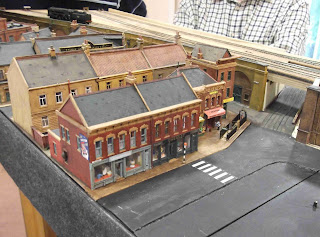 Some of the buildings at the front of the layout. Each group of buildings is built on its own thin base, which fits into a corresponding hole on the main baseboard. Thus individual groups of buildings can be taken away from the main layout for further work.

Location seems to be "somewhere in South East London", and period probably in the 1960s, around the end of steam on the railways. 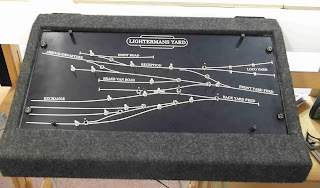 Having originally been built for DC operation, it has now been converted to DCC. Turnouts, including a double slip, are all electrically operated from the central control panel.

As a shunting layout, no signals have been deemed necessary yet, but probably one or two will be added eventually. 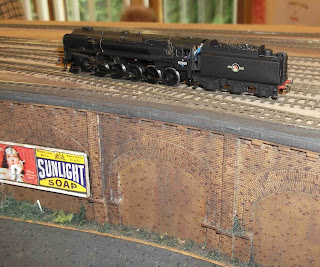 Extended testing of the trackwork, using a 9F.  It struggled round some of the curves, so using it as a shunter doesn't seem like a good idea.

Its stated haulage capacity was seventy four wagons, but there were no wagons available to demonstrate this (and such a train would be far too long to fit on the layout). 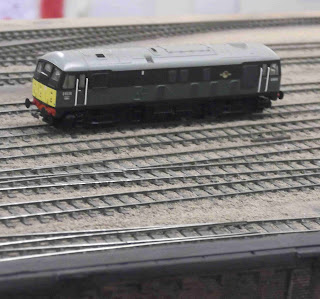 A bit more testing of the trackwork - this time a RTR diesel with drop-in wheels. One or two minor hiccups, suggesting that btb tolerances need checking on one axle and one turnout.
Posted by David Walley at 14:13 No comments: