This month we chose to do what several other 2mm Association Area Groups have done and have a virtual meeting using Zoom. Anticipating some problems with technology and Internet connections, and not a little resistance too, Howard - with his MERG - experience set up a zoom space to commence at our normal meeting time on Sunday May 10.

The theme of the meeting 'what's on your worktop', was announced beforehand so images could be collected and shown without the need to download during the meeting. We recorded the meeting, but the mp4 file is too large to post here. 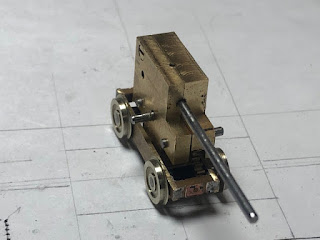 First to show, David says I’ve attached a couple of photos of things I have been working on, one is a new test track using a couple of the association’s point kits and a start has been made on a new loco one bogie almost finished and the other not to far behind just got the rest of the loco to do now! 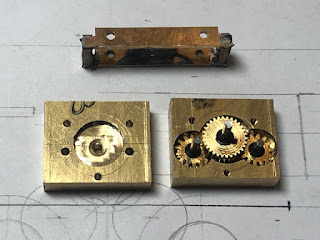 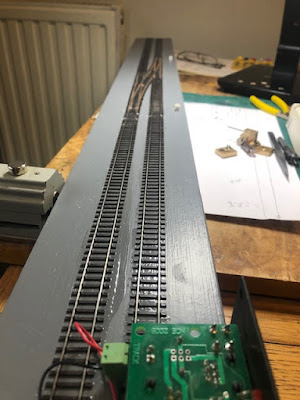 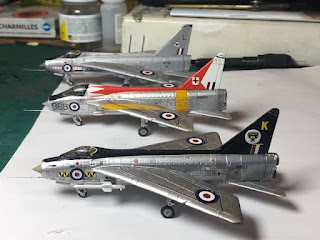 The last one isn’t railways but they’re almost 2mm scale. 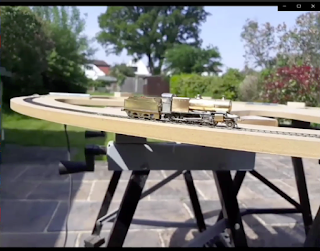 Alan was contributing using the chat window and sharing his computer screen.

On the left a still from a video of a 7F on the test track, and below the track opened out to the circle below. The 7F is the same kit of parts Keith used. It is an etch by Nigel Hunt and I have produced the fire box and boiler. Along with my version of the build I have been making other parts to assist construction, hence I am probably 2 and a half years behind Keith's version. I have only just completed the valve gear and again I have made some extra parts to help with this. As you can see it now runs and I am happy with the performance so far. I am looking to make the chimney and dome again I have used commercial castings and they do not look quite right.

Referring to the following pictures, Alan adds; The first of the photos below shows a batch of gear meshing tools for the shops.
These have been machined from Brass bar. The round bits have all been turned on my CNC lathe, including off set turned pin holders for the pins. The pins themselves are silver steel (tool steel) which will need to be hardened. 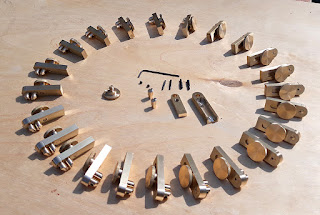 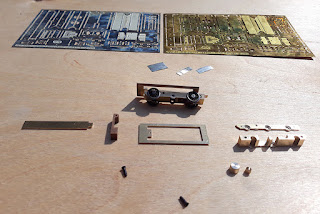 The next photo with the etches are some parts I am developing for the 'Fowler' tenders required for various locos running on the S&D. The etches are an old Mike Raithby design he did for his 4F kit. As designed they are a little narrow so I have made extra parts the correct width on the mill. The chassis is made with etches and double sided PCB the chassis alone is made from many pieces and pivots on a pin so as to transfer load onto the back of the loco a useful feature. My design uses only 12 parts and screws together. It is hoped to make new tender side pieces and most of the gubbings that goes above the chassis to form a complete tender. Keith has produced some nice axle boxes in resin to complete the detail.


Just a quickie to say I thought yesterdays meeting by Zoom quite successful. Although I did not have a microphone or camera I managed to contribute to the meeting. As you can imagine this is a little frustrating having to type while others are talking but all in all I think it was well done. The 30-40 minutes or so went very quickly. Nice to see those I could see!


Howard says; "I started converting MSN to DCC by removing the sectional wires and adding a DCC bus bar. However my stomach problems (acid reflux) means I cannot easily bend down or lift heavy objects, and this started after I commenced the DCC conversion. Working on one baseboard means I need to turn it over, and I found this difficult on my own. Having broken the loading gauge and one of the station lamps I decided I needed an alternative solution. 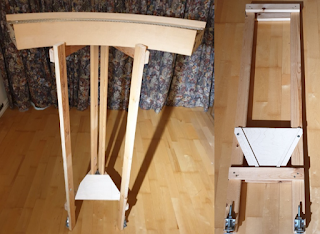 So I turned to another problem – how to support the corner boards. Eventually I came up with the Mk3 version – a folding set of legs which fits under a corner board with no alteration needed on the corner boards. This can be slid along the corner board once it is fixed to the layout and help support the next corner. In keeping with the ethos of MSN it would have been better to make this out of plywood, but I did not have any suitable and so used some wood recycled from some bunk beds. There is a small plywood base that holds the legs in position, and I fitted levelling feet. 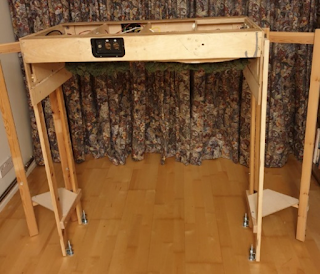 I then realised I could reuse these to hold each baseboard in a way that allowed me to turn the baseboard over.
I used an M6 bolt to pivot the end plates, and small brass bolts to hold it in position with holes in the end plates. I added some threaded insert nuts on the end plates to take the M6 bolts; unlike the T nuts these can be fitted flush to the surface.