All the regular members turned up for the meeting, including two who had missed the Exhibition (with feeble excuses about holidays), as well as three visitors. 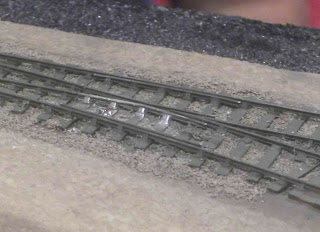 The main running boards were assembled for a troubleshooting session, tracing the cause of a dead section that had appeared towards the rear of the layout on the final afternoon of the Exhibition. Poor contact with part of a point frog was the diagnosis, and was fixed.

We were assured by David Smith that real railwaymen (i.e. drivers) never used the term turnout, always point - though lesser mortals like civil engineers sometimes got it wrong. So we will try to get it right in future. 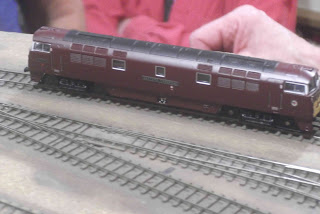 The fixed area was successfully tested, with the Jinties that did the shunting for the Exhibition. Also Keith's converted Dapol Western diesel tested the track, suggesting a little more work might be needed, though on the loco rather than the track. One bogie used home converted 2FS tender wheels, and worked well, the other used the original Dapol wheels with adjusted back-to-backs, but it appeared the flanges were still a little too coarse.

The rest of the layout was tested, showing no further problems, then it was dismantled and put away to avoid distracting the group during the debriefing session.

I think the main conclusion was that there had been too little operator experience on the layout (the planned pre-Exhibition operating session having morphed into a bug-finding session). So more intensive operator training (aka "playing with trains") is planned before the next Exhibition.

Incompatibility of coupling heights was discussed - Alan Smith, having rather less vehicles, agreed to adjust his to match Keith's.

Invitations to Chatham Exhibition (June 2016) and Bournmoor and Farnham (2017, both 2FS-related) were accepted. 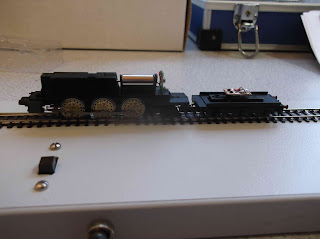 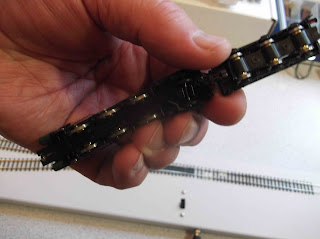 Pete Townsend brought along a newly-acquired Farish Merchant Navy, converted using Association wheels, Jinty conversion kit for the loco and frame bushes for the tender. Wheel-quartering seemed slightly off, otherwise it ran well on Alan Smith's test and demo track. As it hasn't yet been converted to DCC it couldn't have a run on Lightermans Yard as this month's implausible visitor. 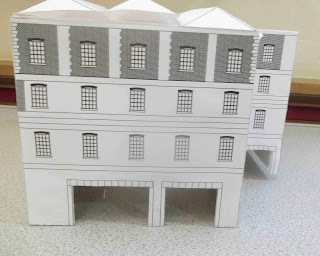 Alan Smith brought along the latest iteration of the goods shed/warehouse, with suggested windows and brickwork, together with pictures of a selection of real-world prototypes for comparison.

Richard was conscripted to work on a backscene - having suggested digital printing on vinyl-like material. Keith volunteered to set up a list of "things to do" to try to ensure the most important improvements were finished and installed and tested in time for the next outing to Chatham in June 2016.

Peter Townsend distributed some model cars, expecting them back assembled, painted, glazed and weathered for installation on the layout. He also revealed that he had demolished one of the two recently built blocks of flats, replacing it with a viaduct to produce a better scenic break in front of the fiddle yard.
Posted by David Walley at 04:43 No comments: