The August meeting was replaced by an outing to the Railwells show. Thank you to Alan S for agreeing to be photographer and guest editor for this month. 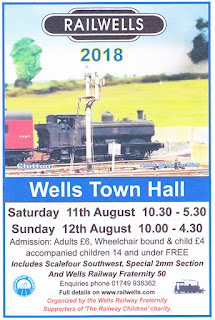 David and I set off bright and early at 7am sharp. We had arranged to meet with Keith and Gordon at the Church at Wilmington at 8am. Cars parked up we set of with David at the helm and what seemed like no time at all we arrived at the wells show just after opening time at 10.40.
Straight into the main hall we hit the ‘North Cornwall line’ and, it seems, most of the southern contingent of the 2mm Scale Association.
The North Cornwall line occupied most of the main front hall with only a few small side tables filling the rest of the area. We quickly decided to venture up stairs as the hall itself was quite busy and we could come back later when not so packed. Upstairs found us another three 2mm layouts:-
Bordesley North by Jim Allwood,
Callaton by Mick Simpson.
Mini MSW by Alan Whitehouse.
Bordesley North and Callerton are both new layouts and between them show a good few novel ideas with sound locos being much in evidence.
Mini MSW is another layout to feature sound on some locos but to me the revamped scenery was the major attraction.

Looking around the upstairs hall found some very nice P4 layouts along with the usual traders and societies. Off of the main halls were side rooms with further exhibits and traders a bit like Aladdin’s cave with wonders around every corner.

One layout, which had us all intrigued, was a T scale layout at ¾ of a mm to the foot. This appeared to run very smoothly and as none of the locos were powered everybody was wondering how it was done. The owner of the layout was not giving anything away and stated ‘All with be revealed at 4pm’ (now that’s something we just had to go back for).

It was by now time for lunch so we headed off to the Crown Inn next door. We all enjoyed a pint and a very large house beef burger, now that was a beef burger.

Back to the show things were a little quieter on the North Cornwall line so we had a good look. The layout was really 7 layouts in one and considering the somewhat damp and humid conditions is was amazing to see Johns locos perform so well, these could be tiny 4 wheeled locos crawling along over all manor of track work,  without a hitch, or large express engines gliding along as though they really weighed the 70 tons or so of the prototype.

The sign of a good show is when you look up from the exhibits and realise its nearly time to go, ’have we really been here all day?’ we just had time to get back to the T scale layout to see how it works. Sure enough a 4pm sharp the room where the layout was displayed was packed to the rafters! The little black box on the front of the layout hid the gubbins. In true pantomime style we counted down the screws coming out of the box to reveal all…… A strimmer cable and some brass tube! well not quite as simple as that but a very clever way of producing a smooth running loco to a minuscule scale.

All fascinating stuff and so ended our day. Just the ride home and all the joys of the M25 on a Sunday evening which, indecently, did not disappoint due to a car fire after junction 9. This however only delayed us by around 30 minutes or so but overall we made good time.

Thanks again to David for doing all the driving and to Keith and Gordon for all the banter along the way.

Posted by Lightermans Yard at 04:57 No comments: