Final preparations before next month's appearance at Chatham Exhibition. There was no attempt at running, or even at fault-finding, the meeting concentrated on scenic improvements. 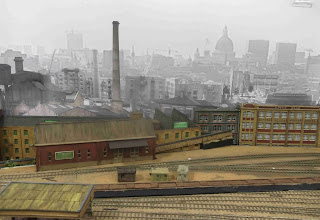 The main item was the latest version of Richard's backscene, which now incorporates appropriate fading towards the back, with the colour becoming progressively more grey and the outline becoming more blurred. Overall it's a grey impression, suitable for a rather smoggy day in London. The wall suspended in mid air in front of the warehouses was trimmed to shape, and taken away with the baseboard to be glued in place. 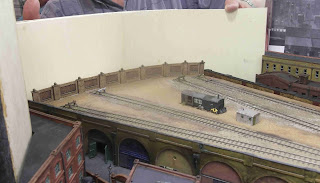 The backscene now hides the back of the layout, but the left end needs further work. A suitable
curved frame was prepared (at least the initial outline was cut from Pete T's roll of bendy plywood), for final trimming to size and gluing into shape.


Pete T and Richard have been working on the frontage for a warehouse to go in front of the left end of the backscene - Pete T scratchbuilt a single section, then Richard used that as a master to create further sections. That should be the subject of a future blog entry. 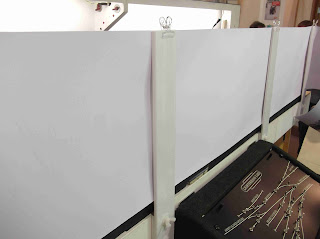 A view of the rear of the layout, showing the supports for the backscene (Gordon's work, I believe). 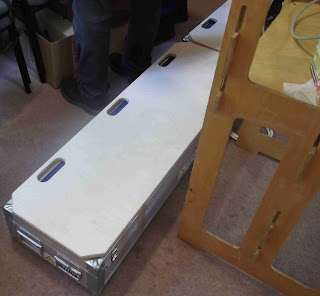 Alan S had tackled the problem suffered by vertically-challenged operators (they can't see over the backscene...). Two duckboards have been cut from thick plywood to go on top of two of the scenery boxes. elevating the operators by almost a foot. 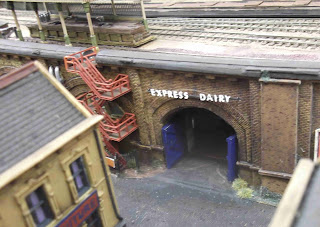 Pete T had completed a bit more scenic work on the dairy - an elaborate staircase from street level, and the basic interior (and open doors) for the dairy premises under the viaduct.


An invitation for next year's Epsom Exhibition (April 2017) had been received, and it was agreed this should be accepted.

Alas this may be Pete T's last attendance at a Group meeting - he is aiming to complete sale of his house and move to Somerset early in June. However, solicitors are dragging their feet, and it's possible he might be around for a meeting or two yet - at least next month at Chatham.
Posted by David Walley at 12:48