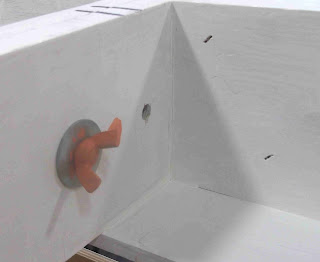 As usual, the meeting focused on Lighterman's Yard, continuing to prepare for the next outing - Chatham Exhibition in June.

After assembling the layout, the bolts holding it together were painted, with same a dot of paint of the same colour added nearby, thus indicating which bolts go where. 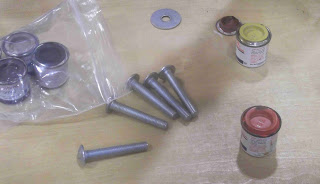 So far as possible, same colour paint was used for all interchangeable bolts, but with a rather
restricted palette of colours available there were a few inconsistencies. 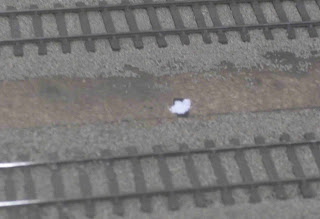 Continuing the painting theme, locations of all the uncoupling magnets were identified and marked with blobs of white paint.

All uncouplers were checked (successfully), and further operator training took place, with most shunting moves completing as intended... 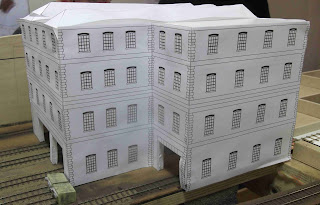 Alan's warehouse had acquired a lot more windows (and a slightly warped roof). Further amendments were proposed, to keep him busy for the next month or two

Discussions drifted away to Keith and Alan's plans for a Somerset and Dorset layout.

Further measurements were taken to ensure that Pete T's latest buildings and Richard's backscene will fit together when the two are both added to the layout.

Alan's latest 2FS conversion, a standard 5. Valve gear had come adrift on the far side of the loco, and a tendency to jump over point checkrails suggested that back-to-back adjustments would probably be needed.

With Pete Townsend's retirement and exodus to Somerset drawing ever-closer, Pete King was appointed to succeed him as Group Co-ordinator.
Posted by David Walley at 04:58