Final Practice before the Exhibition.

Keith's new traverser, with five loco standings and two access roads on the right, and four roads for trains on the left. The right hand side is fixed, the left is moveable, with a lever-operated bolt system to ensure the moving part aligns correctly with the static part. 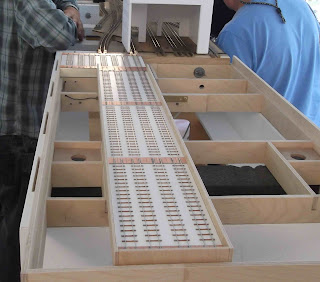 A view from the end, showing the unfinished area on the right. Most will be short roads under the virtual extension of the warehouse/goods shed in the background, whilst the right hand road is currently proposed for some form of runround loop for trains exiting and re-entering the layout. 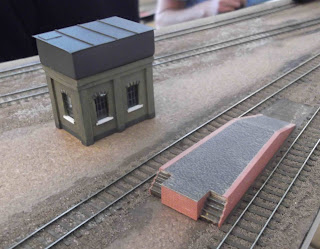 A couple of new buildings from David Smith, water tower (complete with lid/roof to keep the water free from impurities) and a platform which will probably provide the water crane(s) and coaling facilities. 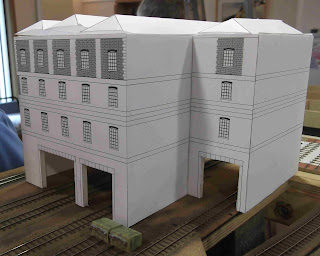 Mock up by Alan Smith for the goods shed/warehouse. There's still some discussion about height of the entrance arches, position of the right side wall, number of windows, position of the lift shaft, before the final version is produced. 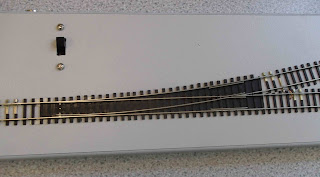 Also for Alan Smith, though not strictly for the layout - a small demonstration board showing the latest style of Easitrac turnout with (almost) no soldering. 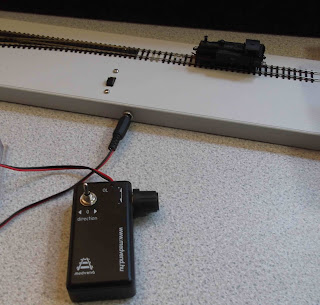 More from the Association Shops to ease the entrance to 2FS - a Farish Jinty converted using the latest kit, and one of the battery powered controllers.

After a trip to the AGM at Bournmoor they will probably appear at next month's Exhibition to lure in new members. 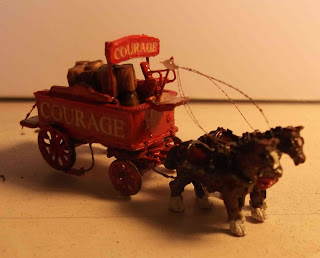 My own modest contribution - a horse-drawn dray to deliver beer to the Courage pub, whose cellar door is currently open. A Langley whitemetal kit, with extra detailing.

But what about the promised practice session, you may ask.

It developed into an extended bug-finding and -fixing session.

There was a similar fault at the other end of the layout - faulty polarity switching at a turnout causing intermittent shorts.

All were finally fixed, leaving about half an hour for running.

Pete King's multitasking abilities were tested by assigning him as signalman and driver of two trains (with a single controller), and he succeeded (most of the time).

Half a dozen vans were added, a couple of brake vans, some shunted ensued. Lightning reflexes caught those items propelled off the end of sidings before they hit the floor, confirming the requirement for a few more stop blocks.

The draft information sheets were discussed, and strong disclaimers were added that it's only a work-in-progress.