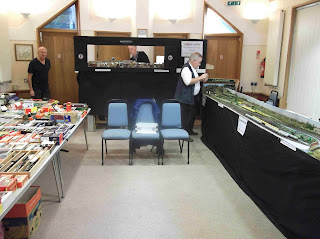 Six of us arrived bright and early on Saturday morning to set up the layout - to find that the other two stands in the room hadn't left enough space. After some delicate negotiations, one of the stands was moved far enough to allow us to squeeze Lightermans Yard into place.

To the left can be seen a second-hand stall (almost exclusively OO), whilst the N gauge layout which normally shares the room with us is seen in its usual position on the right 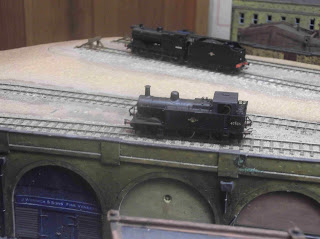 Alan Smith and Keith provided rolling stock - a couple of Jinties for shunting, and a variety of locos to transfer wagons between layout and fiddle yard. The first day saw rather too much rolling stock in use - at times it was difficult to find a spare siding into which to shunt the latest arrivals. 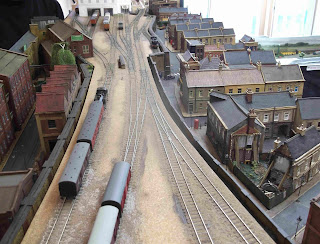 Running was generally very good, apart from the occasional operator error (usually driving into wrongly set turnouts). There were a few serious electrical problems with the layout, but we became fairly proficient at tracking these down and either fixing them or finding workarounds.

Coupling and uncoupling wasn't as reliable as we would have wished - I think the two contributors of rolling stock used slightly different height standards, and operators often found it difficult to locate the uncouplers on the layout.


Comparison of slow-running of the two Jinties suggested the greater cost of CT decoder chip against Bachmann chip was justified.

The second DCC controller showed a frequent tendency to misbehave, but this usually seemed to be the after-effect of shorts on the layout, and it recovered eventually. 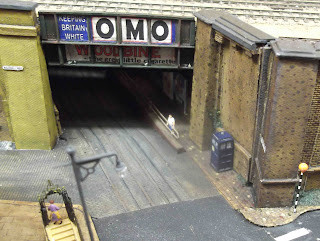 Spectators were highly complimentary about the layout, particularly the buildings. Children were generally challenged to "Find the pigeons", and rarely succeeded. A small colony of 3-d printed pigeons has started to inhabit the area around one of the bridges, and is expected to spread further (particularly to the carpet).

One unhappy young spectator hurled his dummy at the layout, scoring a direct hit to derail one of the Jinties from a distance of about six feet. Perhaps a future English cricketer? 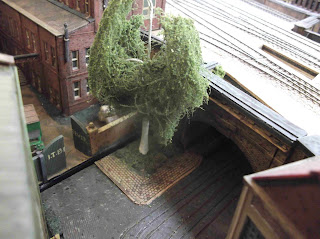 The first tree made its appearance on the layout.

Particular attention has been paid to grouping figures in such so that it seems natural for them to stay in the same place for ages: 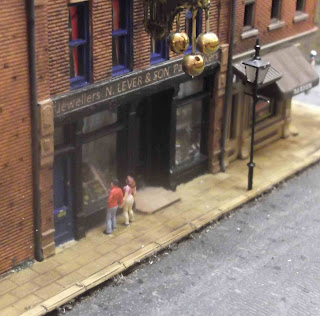 a couple staring into the jeweller's shop window 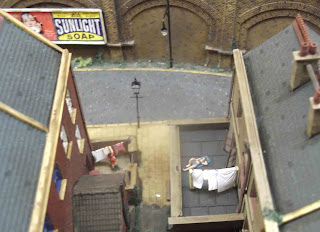 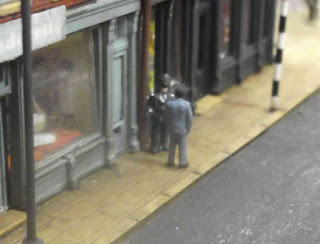 a policeman chatting to somebody, 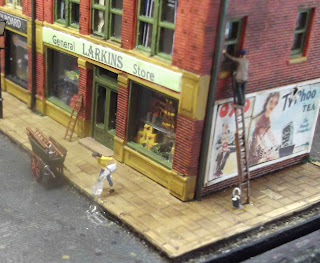 and some window cleaners hard at work (though one does seem to be very slow emptying his bucket). 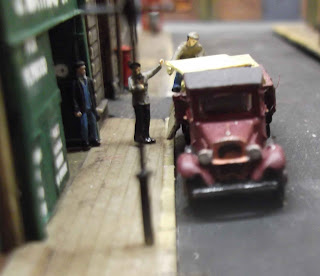 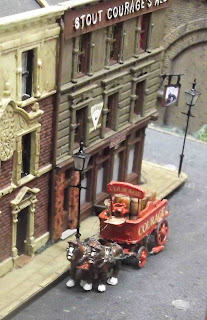 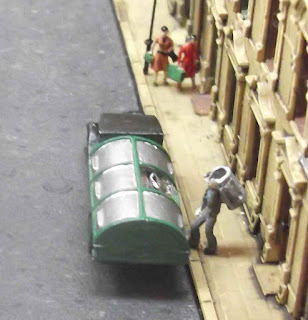 There were a few expressions of interest from Exhibition Managers, so perhaps the layout will be appearing in public again sometime soon.

We were all exhausted at the end of the two days, but pleased with a successful performance as very little time had been spent operating before the Exhibition, and we were all "learning on the job".