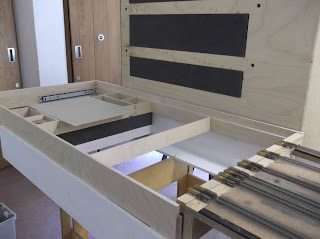 Keith had prepared a new baseboard frame to support a traverser/fiddleyard for one end of the baseboard. Current plans are to devote half of it to a traverser, to hold traffic to/from the outside world, with the other half tentatively allocated to an extension of the yard sidings.

Alan had replaced the lighting system with LED strips, much lighter in weight as well as much cooler in temperature (the wiring for the previous system ran disturbingly hot!) 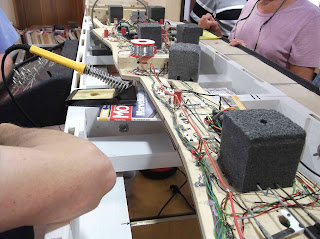 The trackbed spent much of the session inverted for repeated troubleshooting sessions, testing having revealed a dead section. After fixing that, the layout exhibited a permanent short circuit, for no apparent reason.

Time ran out before the last-identified fault was fixed, so the board was taken away for remedial treatment.


Various building mock-ups were discussed, and approved, and the finished versions are eagerly awaited. 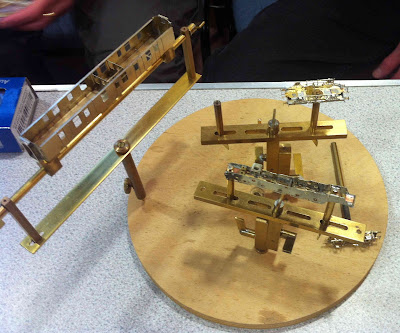