Big thanks to Pete King for this month's meeting report and photos. 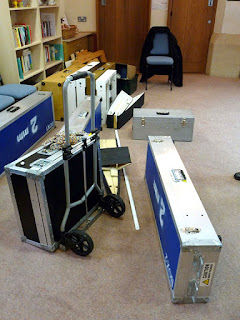 In spite of Storm Ciara, Alan, David, Gordon, Keith and Pete K managed to make the meeting (will nothing keep these madmen away?). Once the unpacking of the cars, after Eastleigh, had created the usual pile of parts the meeting proceeded.

All present unanimously agreed to accept the offer of a place at next years’ Portsmouth show.
The first and most important item was to make a more permanent soldered repair to the errant wire, see the Southampton blog. Keith was happy to be soldering the right way up for a change! 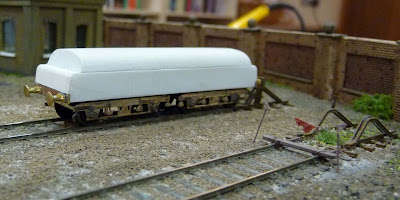 David opened a box of goodies which included two diesel brake tenders, a class 37 body and a track maintenance vehicle. The class 37 had been heavily modified and 2 millisized. The resizing was achieved by reducing the length and making two cuts lengthwise either side of the roof to reduce the width. David said the ends of the bonnets should be slightly inclined so that was also part of the extensive mods.

Keith showed an Evercreech Junction fiddle yard crossover he had constructed this using the Templot templates provided by Pete K.
It was then time to face Ciara once again for the journey home.

Loco of the month; Modified Class 37!
Posted by Lightermans Yard at 10:21