Various minor improvements were evident at the February meeting. 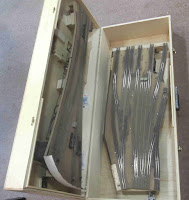 Keith had rearranged the trackbed box - the two halves of the trackbed are now fastened separately to the floor and roof of the box, instead of being screwed together in a confusing manner. Also there is now a screw fitting to the trackbed, to pull it down and reduce the bowing which tended to produce runaways during shunting.

Alan S had rearranged the scenery boxes, numbering them as 1 to 3, that being the order in which their contents are positioned on the layout.

He had also provided battens for the duckboards, to provide another inch of elevation for vertically-challenged operators.

And finally Alan's main warehouse was on show, in an almost-finished state.

Richard was working on the extension to the backscene, to go behind Alan's warehouse and hide the fiddleyard. It should be finished by the next exhibition (Epsom in April), though Richard is off to Australia and will miss the next two meetings.

Testing of trackwork and uncoupling magnets revealed that the gremlins had struck again - a dead frog, positioned in a completely inaccessible location. The offending half of the trackbed was removed, and an extended diagnostic session identified a dry solder joint which was fixed. 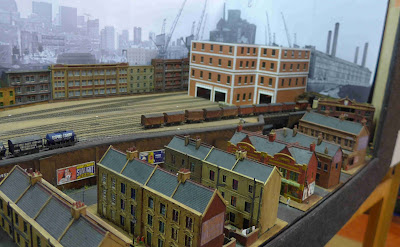 An overview of the warehouse end of the layout, with new backscene in place, and selection of wagons for the layout - mostly a mixture of BR and GWR vans, from Pete K.

A close-up of the warehouse and backscene, during experiments to check the clearances.